With 2-way audio communication support, IP cameras (network cameras) can capture sounds coming from a monitored site through a built-in/external microphone and relay it back to security personnel remotely monitoring the site. The security personnel can then verbally communicate with people around the camera via attached speakers to issue instructions, warnings, etc.

Bright lighting that originates behind an object of interest will lead to underexposure for the main subject. A person standing in front of a window or entering through an outside door are common examples. When viewed using a regular camera, the person entering through the door will appear silhouetted. Backlight compensation technology is designed to optimize light levels to present the best image of observed objects given the lighting conditions at that moment. IP cameras (network cameras) that feature this technology will shutdown extremely high and low level light while maintaining normal lighting conditions for the objects in focus. So, through BLC, a security guard can clearly identify the object in focus even when there’s excessive light coming from behind the object.

When cross line detection is activated, a virtual tripwire is drawn across any live IP camera feed, eliminating the cost and hassle of installing external sensors. When the line is 'crossed' by a person or object, the system will trigger an alarm.

Equipped with a built-in ICR (IR-cut filter removable) and an IR illuminator, IP cameras (network cameras) can deliver colorful videos during the day and black & white video when the illumination drops below a certain lux level.

The IR-cut filter is a mechanical shutter placed between the camera sensor and the lens and controlled by a motor or an electromagnet. During the day, the ICR will block infrared light and allow only visible light to pass through. At night or during low-light conditions, the ICR will be mechanically removed, and the live image will become black & white, which is more sensitive to infrared light. Any applications involving outdoor installations and low-light environments, such as controlling traffic and public safety, can benefit from the IR-cut filter switch feature.

As light levels decrease, the noise level increases to compensate for lower brightness levels. 3D & 2D dynamic noise reduction is a powerful technology to provide clearer video with less noise under poor lighting conditions, making it easier to identify people or objects. Best of all, it dramatically reduces the storage capacity for backend encoding through an improved, cleaner signal. 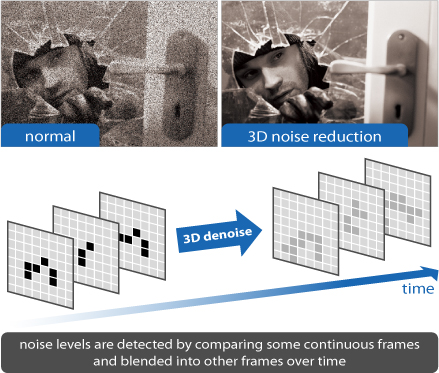 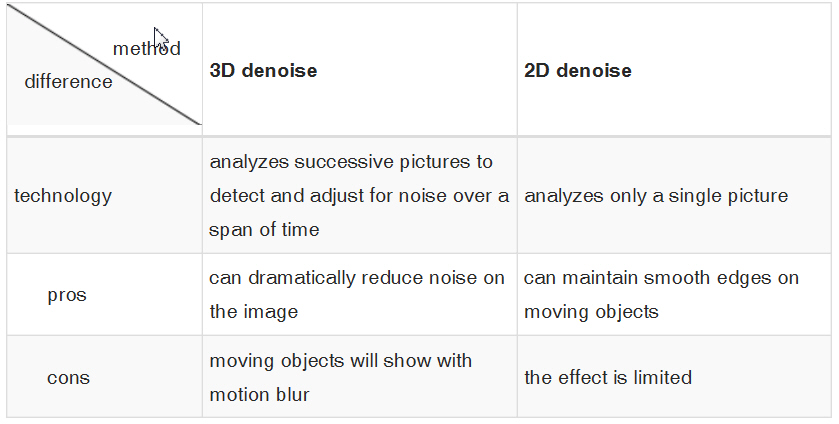 The Event Booster function is an alarm option that allows for an instant frame rate boost under specified conditions. After setting up an alarm trigger (e.g. motion detection, Digital Input etc.) the user can use the Event Booster function to ensure smooth imaging when the alarm has been triggered. In addition, the base frame rate can be reduced, saving bandwidth and storage space, ensuring that should an emergency situation arise, it will be recorded at the maxiumum frame rate available (for current resolution). 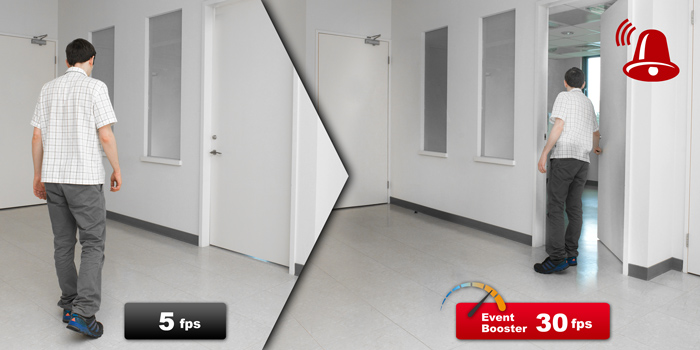 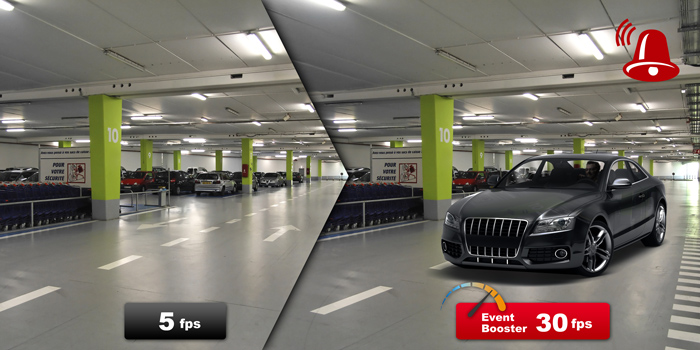 The electronic pan/tilt/zoom (ePTZ) function allows users to zoom in and focus on specific parts of a camera's live video stream without moving the camera physically. Through ePTZ, IP cameras (network cameras) can support high-resolution close-up shots while allowing for greater bandwidth optimization and freeing up limited storage space. 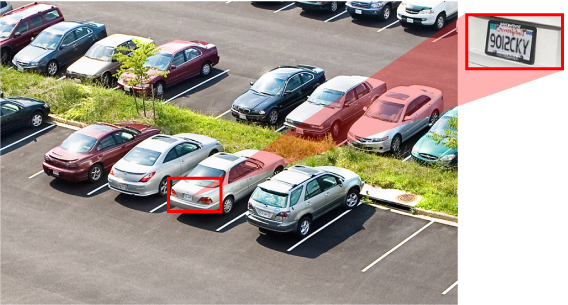 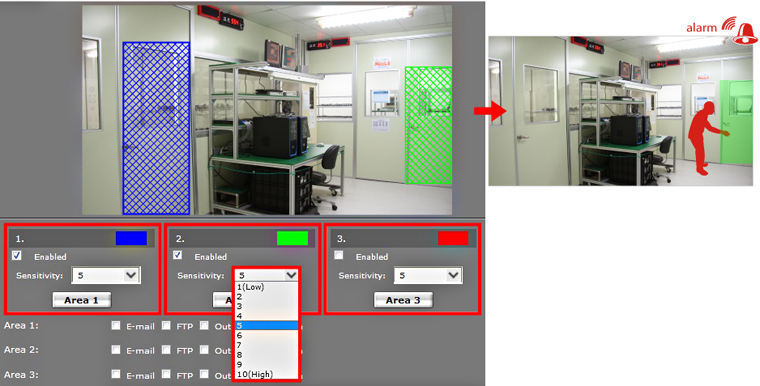 In areas prone to vandalism, camera housing must be built especially robust, able to withstand multiple violent physical assaults. Vandal dome type cameras are a prime example of this kind of vandal-proof camera. IK ratings, based on the IEC 62262 international standard, are used to establish the level of protection of a particular camera/housing against mechanical impact. Two types of tests are employed in determining the IK rating: a drop test in which an object of certain mass is dropped directly onto the camera/housing and a strike test in which the camera/housing is hit with an object of certain mass and made of specified material. 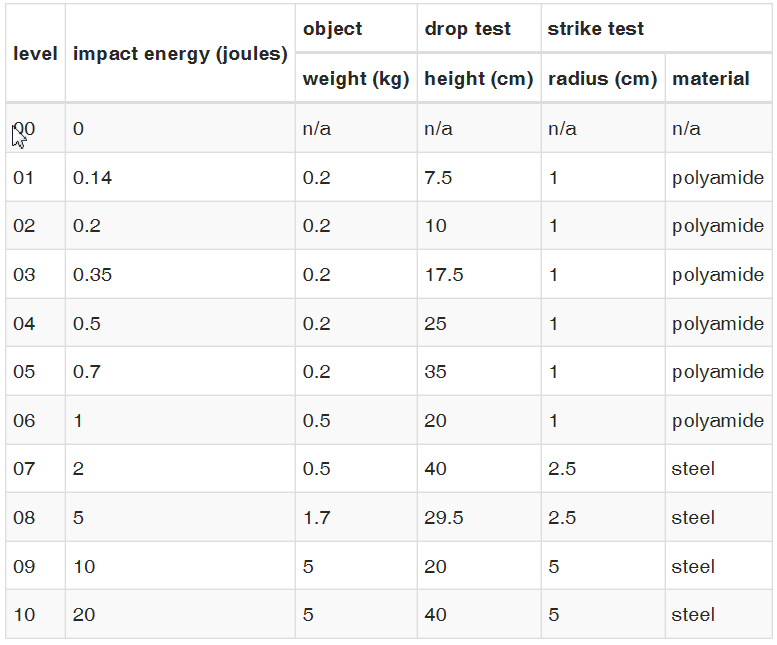 IP (or 'Ingress Protection') ratings are used to define levels of effective sealing of electrical enclosures against intrusion from foreign bodies (tools, dirt, etc.) and moisture. The numbers that follow IP each have a specific meaning. The first digit indicates the level of protection that the enclosure provides against access to hazardous parts (e.g., electrical conductors, moving parts) and the ingress of solid foreign objects. The second defines the protection level of the equipment inside the enclosure against harmful ingress of water.

A built-in motorized lens allows for easy focus and zoom tuning remotely via the camera’s GUI, so focal point and focal length can be changed anytime. Users can take full advantage of vari-focal lens with stepping motor and one-click focus adjustment to set camera’s watchful eyes on the right spot. This function is especially recommended for remote, hard-to-reach locations or unsafe sites like tall buildings or utility poles. 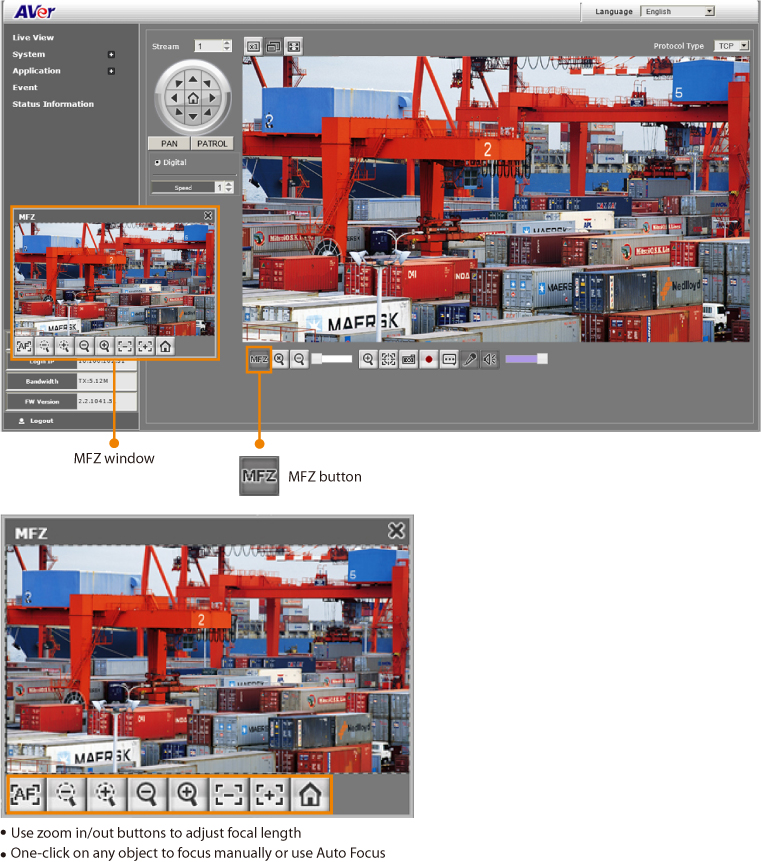 The missing object detection feature alerts users if there is a change in the scene due to a missing object. Users must first decide the period of time they wish to elapse before a missing object will trigger an alarm, greatly reducing the chances of false alarms.

By incorporating IEEE 802.3af compliant PoE technology, IP cameras (network cameras) can be powered over an Ethernet cable, eliminating the need for a power cable. When you also consider the hassle of having to install power supply access points for all 16 cameras, PoE is clearly a more efficient and convenient option. Today, the majority of IP cameras (network cameras) come with PoE technology, making installation easier and more cost-effective than in the past. 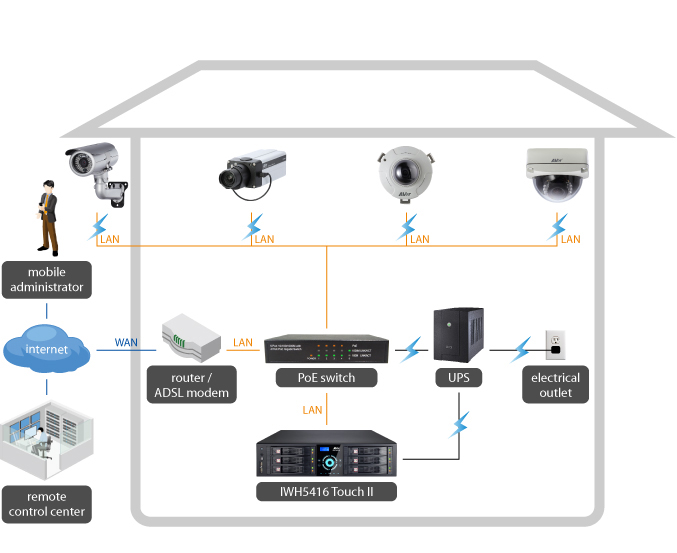 Thanks to a simple 3-step procedure, camera focus is adjusted quickly and precisely, saving time and efforts. Quick Focus can be accessed via a network using web GUI or a BNC monitor connected directly to a camera. During manual adjustment, built-in focus analyzer aids installers in finding the exact moment when the image is as sharp as possible. 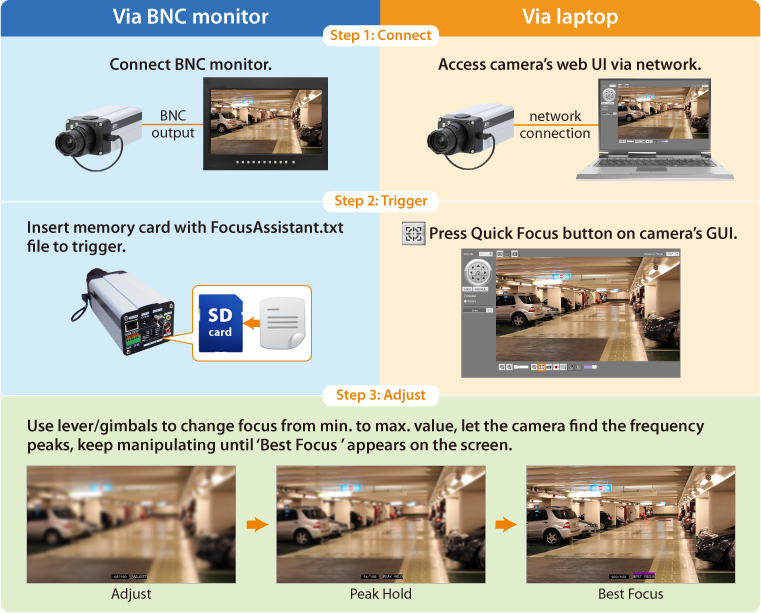 ROI (region of interest) is an image cropping feature designed to achieve bandwidth / storage optimization through targeted image capturing. Users can select 1 or 2 key area(s) to transmit as separate streams for targeted preview and recording. 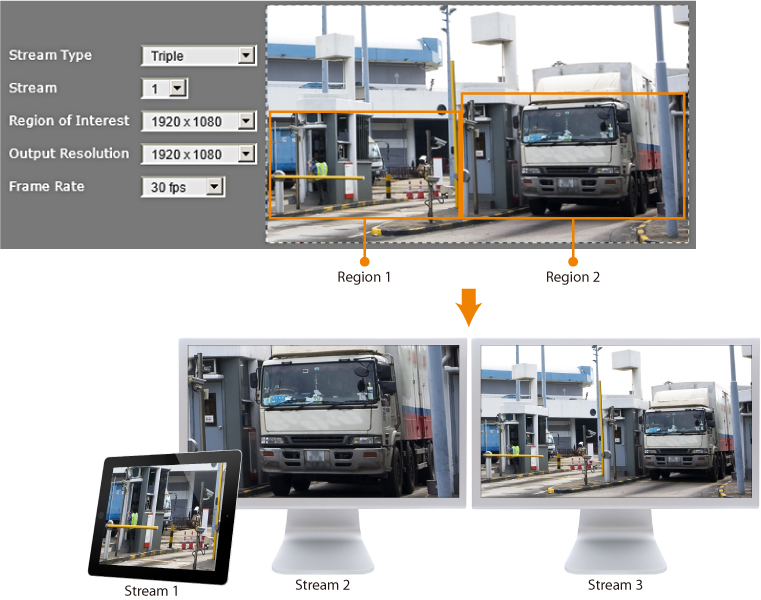 A tollbooth is a commonly seen application for ROI (see image above). In this application, one stream is used to preview the whole area while the other two streams can be cropped using the ROI function to focus on important areas like the entrance/exit, a car’s license plate or a driver’s face. This way, important areas or details can be observed by security personnel using, for example, mobile devices while still keeping an eye on the big picture. 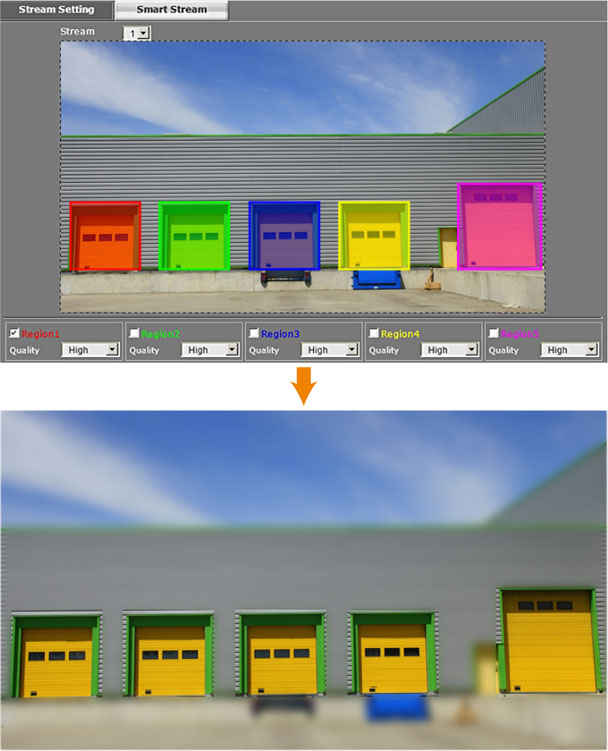 For example, with an overall bit rate setting of 2 Mbps (CBR), the high quality area would be transmitted at about 8 Mbps to ensure sharp images, while the non-essential areas of the image would be transmitted at about 128 Kbps (specific values can vary depending on scene complexity). Typical applications include entrances, access gates, production lines, art galleries and museums.

The suspicious object detection feature alerts users if there is a change in the scene due to the appearance of suspicious object. Users must first decide the period of time they wish to elapse and the required size of the object before a suspicious object will trigger an alarm, greatly reducing the chances of false alarms.

Tampering detection offers three different features to alert you if your camera is being tampered with: spray and cover, redirection and defocusing. If someone tries to tamper with the camera an alarm will be triggered, alerting security staff to the incident immediately .

True WDR is a sensor-based technology that achieves proper exposure levels by capturing short and long exposures and combining them into a single frame. True WDR can be adjusted using three pre-set levels (Low/Mid/High) according to the lighting conditions. Proper calibration of WDR level is essential to achieving the best result –setting the WDR level too low may not produce satisfying visibility, while setting the WDR level to high may lead to washed out images.

Digital WDR (D-WDR) is a software-based technique that optimizes image quality by adjusting the gamma (γ) value to enhance dark areas. The D-WDR level, which ranges from 1 to 8, should be carefully adjusted according to the lighting conditions in order to minimize possible image deterioration (i.e. the image being washed out).

Both technologies are designed to solve the problem of intense backlighting but in different ways. Generally speaking, BLC adjusts the brightness of an entire image, whereas WDR independently adjusts the brightness of the darkest and brightest areas of an image. Compared with BLC, WDR is a newer technology with better performance. Please refer to the chart below for further comparison of BLC and WDR.

Wi-Fi-enabled devices must be compatible with the 802.11 wireless connectivity standards for WLANs (Wireless Local Area Networks). As wireless technology changes rapidly, the 802.11 standard is updated regularly to include all major developments letters are used to indicate successive standard versions. Key differences between commonly used officially released 802.11 versions (b,g,n) are summarized below. In order to ensure smooth interaction between devices on a wireless network, wireless router / access point specifications and relevant settings (e.g. mode, frequency) have to to be compatible with other wireless devices. In case of incompatibility, devices will not work together, e.g. the wireless IP cameras require use of 2.4GHz frequency, they will not work with a wireless router set to 5GHz mode.

Speed and range of a wireless connection depend on many factors, including mainly device-specific aspects like operating mode or transmitting power. Apart from that, physical obstacles can significantly influence connection speed, quality and range. Different environments and materials can obstruct signal strength to various extents. For example, thick concrete walls reduce signal strength to a much higher degree than thin plaster walls. Also, signals are broadcasted much easier outdoors than indoors, thus the effective connection range in open spaces is significantly better than indoor environments. Furthermore, wireless devices can influence each other, decreasing wireless connection strength and quality. This problem is especially significant when devices are put together in a tight space. Also, the maximum bandwidth value listed for each mode is often unachievable in practice and should be discounted significantly to account for network overhead. 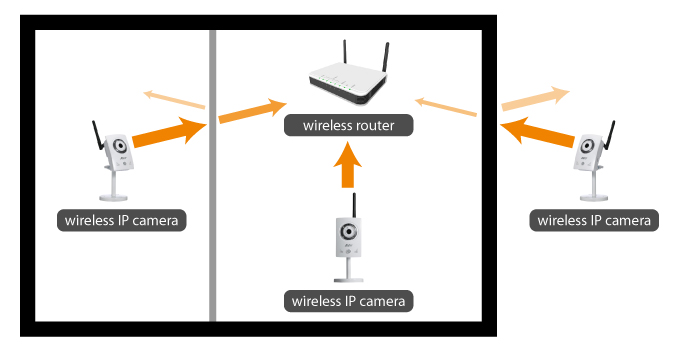 Security is an important aspect of wireless networking. Wireless devices normally support multiple security standards previously, the most common standard was WEP (Wired Equivalent Privacy). Recently, WEP has been succeeded by the more robust WPA/WPA2 encryption protocols, of which WPA2 is the newest and most secure. New protocols come in two subtypes dedicated for different users: safe and easy-to-use PSK (Personal) for home / small office users, and Enterprise (802.1X) for corporate environments. 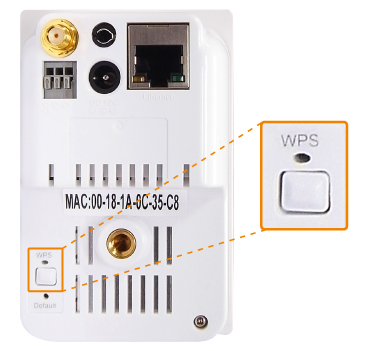 ** ALL context is the feature of AVer series product. Please contact with us for more details .